Back at the beginning of the Twentieth Century, the Schwan Pencil Factory in Germany, which eventually became STABILO, were looking for a symbol to display the confidence of a company that was going from strength to strength after a prolonged period of tough years.

In 1906, a State Exhibition was held in Nuremburg, to celebrate the centennial of Nuremburg becoming part of Bavaria. Such events, since the first World’s Fair in London in 1951, had become a popular way for nations to demonstrate their industrial and cultural strengths.

There was an array of impressive exhibits at the show in Nuremburg, but the highlight (excuse the pun!) was unquestionably the World’s Largest Pencil, made by the Schwan Pencil Factory. This became the symbol for the whole exhibition.

Almost 100-feet in length, the design was based on the expensive Aldebaran pencil. It towered over the Exhibition grounds, perfectly creating the confident impression that the Schwan Pencil Factory owners had hoped for. 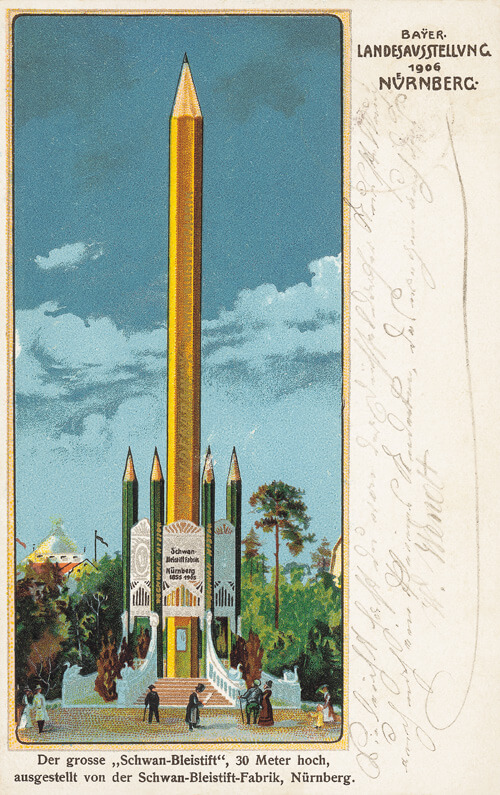 The press was instantly won over by the scale of this stunning exhibit. The art magazine Moderne Kunst enthused: “Why shouldn’t a German company finally come up with the idea that an original kind of presentation is necessary, especially at such exhibitions as these, to command the attention of the visitor among the unbelievable abundance of products on show?”

The giant pencil, acting as a landmark for visitors to the exhibition, also acted as a traditional exhibition stand where smaller pencils and other Schwan products could be displayed.

As you might expect, creating such an impressive symbol came at a considerable cost. The carpentry alone set the company back 3,000 Marks. The total cost, including castings, lights, electricity, stand rent and fire insurance came to 12,821 Marks.

As magnificent as this giant pencil might have seemed at the time, records are always there to be beaten. It pains us to say that the current World’s Largest pencil, according to the Guinness Book of Records, was created by Staedtler in 2011. At 738.2 feet long, it’s over seven times taller than our imposing structure at Nuremburg.

Will STABILO ever attempt to get the record back again? Watch this space!